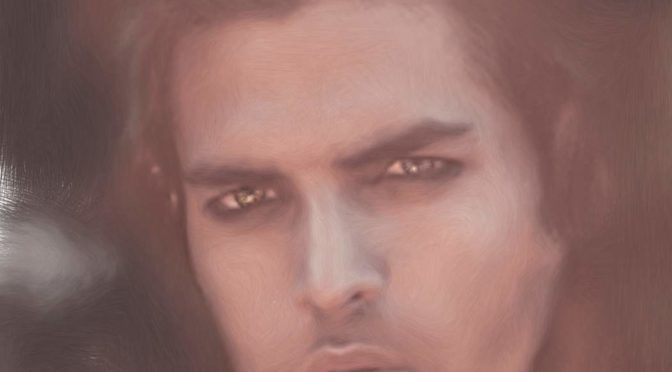 Eyes: brown with silver striations in the left eye and gold in the right

Horus is one of the original gods who escaped Atlantis during its fall. He was saved by Odin, but his sisters, his great great grandmother, and his lover were all killed. The loss of so many integral women affected Horus deeply, and he retreated into a cold shell which only his closest friends had the courage to break through. Slowly he’s emerged from that shell, showing us his true nature, that of a man with a deep sense of honor, loyalty, and love. His scathing wit is never truly malicious, and his actions prove this time and again.

He is the son of Osiris and Isis, and the great great grandson of Re. For reference, he traces his lineage to Re, back through his mother Isis-daughter of Nut-daughter of Shu-son of Re and Lusaset. Isis is twin sister to Nepthys, who is married  to Set, and is the mother of Anubis and Ma’at.

In the human world, he is an antiques dealer. Horus loves all the finer things, but he has a special interest in preserving history. Perhaps because he lost so much of his own when Atlantis was destroyed. His closest friend is Pan. On the surface their relationship may appear hostile, but, like Horus’ wit, it is an act, a way of Horus connecting with someone without the risk of showing his true affection. With women, Horus is especially standoffish. His prickly exterior makes it difficult for him to find love. But I have a sneaking suspicion that love will find him in the end.