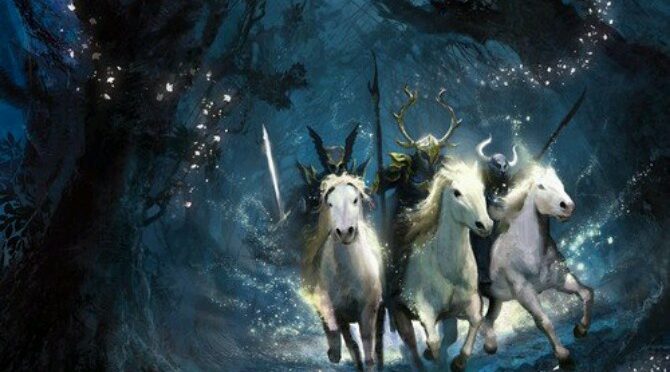 The Wild Hunt is the military group composed of fairies from all three courts with the purpose of monitoring human activity and protecting the fey.
When a fairy joins the Wild Hunt, his allegiance to his home court is superseded by his new allegiance to the Hunt and the Fairy Council. He or she joins the ranks of hunters and trains in one of the three Council Houses. Appointments to a council houses are done by the High Council of Fairy and cannot be refuted. Once in the Hunt, a hunter can strive to move up through the ranks and perhaps become one of the elite commanders known as Lords and Ladies of the Hunt. Unlike human councils, the fairy councils allow their higher ranking hunters, ie. the lords and ladies, to participate in council meetings. Being a Lord or Lady of the Hunt is considered a high honor and a rank just below that of the High Councilmen, who rank just below monarchy.

The reason for such esteem is simple; to join the Hunt you must be one of the fiercest fighters in Fairy and to become a Lord or Lady of the Hunt means you are the baddest of the bad asses. Once a fairy become one such bad ass, they are assigned a unit to command and those fairies under their command become fiercely loyal to their leader (it is very rare to have your unit betray you). This unit is very similar to the extinguisher family units; both a protective and supportive environment. Units are sent all over the Human Realm for posts and often have only each other, in the way of fey company, for years.

Posts in the Human Realm include monitoring human activity and occasionally direct missions. Execution orders are given after reports of criminal activity have been investigated thoroughly. Generally, there are fewer human execution warrants than fairy ones but they are not considered rare. If you break a law of the truce between fairies and humans, knowingly or unknowingly, the Will Hunt of Fairy will come for you… and there will be no mercy.