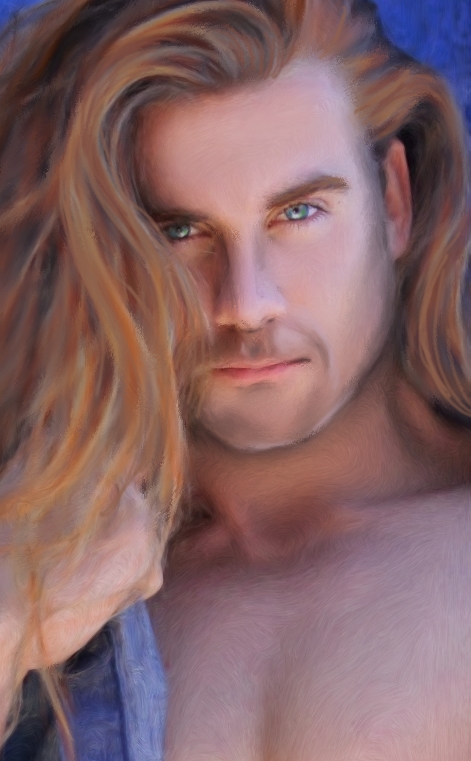 hor Odinson, Viking God of Storms, Thunder, and Seafaring. Prince of Asgard and Protector of the territory

Scent: ozone on the ocean

Thor generally goes clean-shaven, though he’s been known to sport a thick beard in the past. He has chiseled features and striking eyes. He’s the son of Odin and Iord (deceased), brother to Vidar, Vali, and Balder, father of Thrud and adopted father of Ull. He owns a line of cruise ships.

Thor was once a lot like Ull, he was a prankster and loved nothing more than a good joke. But the God Wars jaded him and dampened his humor. He’s more serious now but in his heart, he still loves life and laughter. Which is one of the reasons why he fell in love with Vervain.

He was raised in Atlantis by Iord and Odin. Iord’s death was difficult for him, he was only fourteen at the time and Odin has always been a little self-centered in heartbreak. It took Odin two months before he was able to comfort Thor. Then it was just the two of them for years, until Odin met Frigg. Frigg gave birth to Thor’s brother Balder and Thor’s home life became full of love and laughter again.

Then, when Balder was just three-year’s-old, Atlantis fell. Thor fled with his family and some of his closest friends, on Odin’s boat. They made it to shore and in the morning, they began a new life. Odin led them to the North and established his family as gods among the humans. Thor, ever looking to the sea and the home he’d lost, became a god of the ocean.

*Spoiler Alert: If you haven’t read past Oathbreaker, stop here and come back later.

Vervain came into Thor’s life first as Sabine and although he was too old to be mothered by her, he formed a deep affection for Odin’s third wife. When Sabine died, he mourned as deeply as her sons did. This bond was part of what pulled him to Vervain in her new life. Thor believed it to be Vervain’s magic which drew him but it was actually their shared past. Thor has always wanted the kind of relationship Odin shared with Sabine and when he came into contact with Vervain, he subconsciously recognized her soul and instinctively reached for what he’d always longed for; a love that could survive death.

Vervain was never meant for Thor but Thor has held onto her much longer than he should of partially because of his obsessive nature and partially because he is afraid to give up the dream of having a lasting love. He still has to come to terms with this but when he does, he’ll finally be ready to form a real relationship with a woman who can make the Thunder God happy.