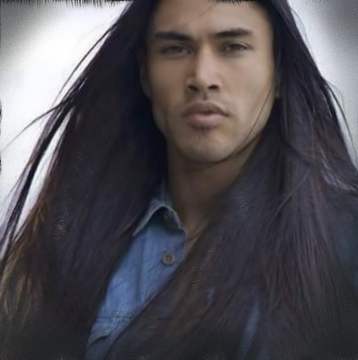 Tsohaonai and his wife, Estsanatlehi, called affectionately Mr. T and Mrs. E by Vervain, are Navajo gods. They are not original Atlanteans, and so have not known the members of the God Squad as long as some of the others. They were drawn in by Thor, after seeing their people abused by their own gods. The couple has two sons, twins, Nayenezgani and Tobatzistsini.  Toby is a peaceful man, but Naye often gives in to his war magic, and uses it to manipulate humans. He’s one of the reasons, Mr. T and Mrs. E joined the Squad.

They are the solid foundation of strength and peace within the Squad, gods who can always be relied upon to lend their aid or their advice when needed. When insanity arises, either Mr. T or his Mrs. will be the one who steers the others back into calmer waters.

Estsanatlehi is known also as the “Self-Renewing One” and “She Who Changes”. Her myths speak of her changing with the seasons, going from young to old and back again like Father Time, but in reality, Mrs. E’s visage remains the same, as steady as her loyalty. Her change magic comes through in other ways, allowing her to adjust to any situation, and alter that which does not suit her.

Tsohanoai is just as calm as his wife, but don’t let that fool you. He may be slow to anger, but once there, Mr. T’s rage can become an inferno. He is the God of the Sun, and the fire of that star is available to him through his magic. If his golden-brown skin begins to glow, it’s probably a good idea to run.

But on the whole, both Mr. T and Mrs. E are generous, loving parents as well as kind gods. They look after their people almost as well as they look after their own children, guiding the Navajo as surely today as they did hundreds of years ago. They never abandoned the Navajo, not even when their worship waned.  Godhood is both an honor and a responsibility to Tsohanoai and Estsanatlehi, and they intend to uphold their end of the arrangement forever.