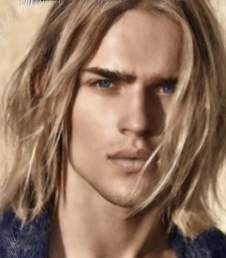 Ull is carefree on the surface. He lives every moment to the fullest, with a smile plastered on his face. But there’s more to Ull than that. His smiles hide wounds from a traumatic past. His mother, Sif, divorced his father, Orvandil, when he was very young. Despite the divorce, Orvandil kept visiting Ull, teaching Ull how to shoot (bow and arrow) and how to be an honorable man. But Sif was bitter over the split and drove Orvandil away every time, until he finally stopped coming to see his son. Once Orvandil stopped coming around, Sif made sure that Ull would never have contact with his father. Then Sif married Thor, and Ull found a new father.

Thor and Ull bonded quickly and so thoroughly that their relationship survived Sif’s second divorce. Sif couldn’t stop Thor from seeing his adopted son, because Ull was well into his adulthood when the divorce took place. Sif was further embittered by this divorce and her son’s continued affection for his step-father. She joined the opposite side of the God War to force Ull into a decision between her and Thor. Ull chose Thor and Sif never forgave him for that.

Ull had to deal with the grief of his mother’s death as well as guilt over their estrangement, and anger at Sif for several traumas in his past. Including the loss of Orvandil, whom he’s never been able to locate.

Despite all this, Ull remains hopeful. He continues to search for his birth father, while treasuring the relationship he has with his step-father and his half-sister Thrud (Thor and Sif’s daughter). He’s become a bit of a playboy, but in such a way that women adore him despite his lack of commitment. Still, Ull longs to find that one woman who he can be happy with, and be true to for the rest of his very long life.