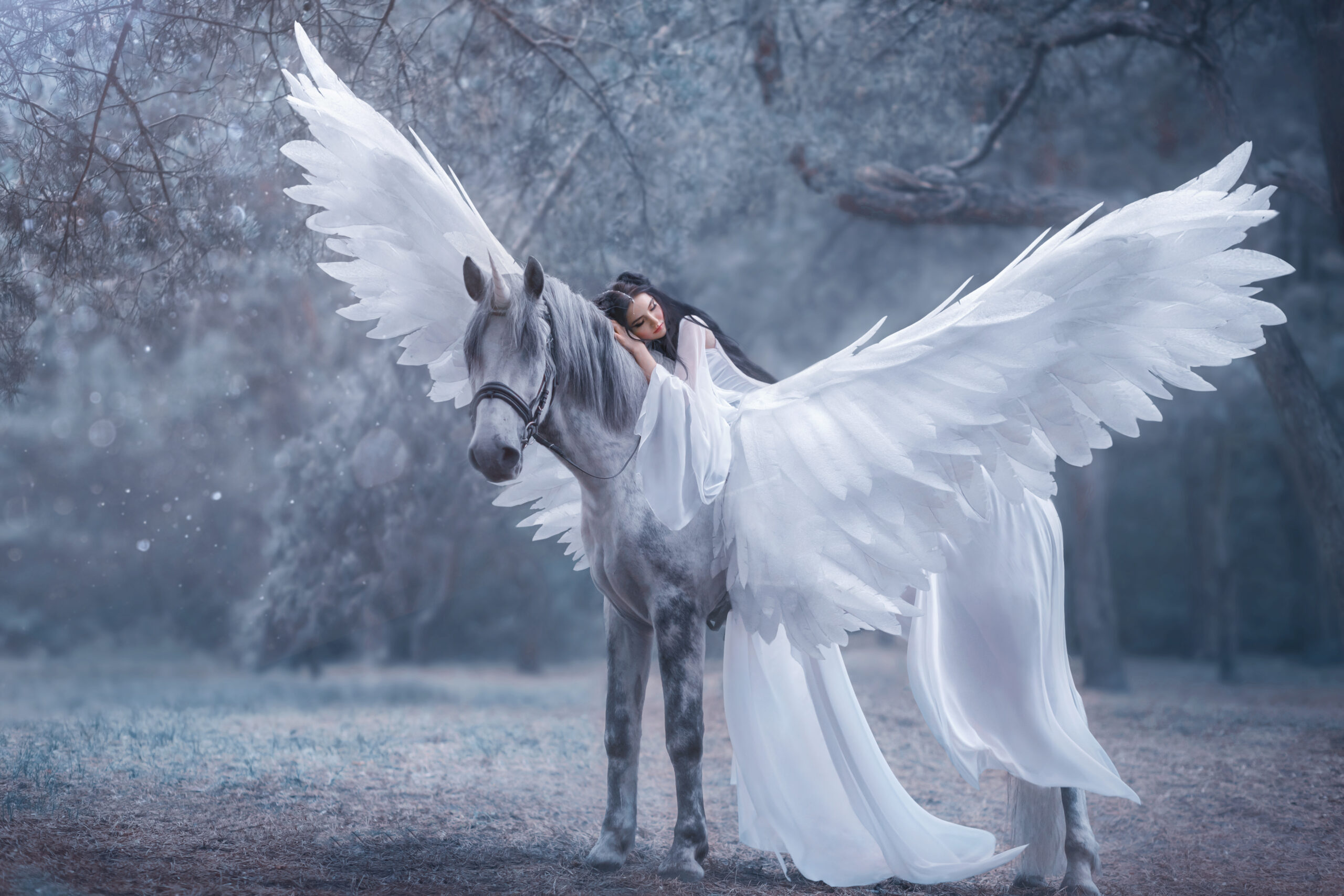 Not all of these races have been used yet but they’re here for when the time comes.

Twilight Sidhe are usually fairies whose parents were Seelie and Unseelie Sidhe. They look like Sidhe but have unique magic. There is only one unique physical trait found in Twilight-Sidhe (not all have it but it can only be found in Twilight Sidhe) and that is Sunset skin—a pinkish bronze skin color.

The blending of some of the other fey races from Seelie and Unseelie have sometimes produced unique Twilight Races. Here are the ones mentioned in the books so far:

Bargests: Horned dog-shifters with fiery eyes. They can take many forms but usually go with a big, black, shaggy dog.

Lonnegawn: Plant people who live in the forest.

Fuilron: The Bloodseals. They are half Selkie and half Baobhan Sith. Also known as Vampire Seals.

Elves: There are Light and Dark Elves but they consider themselves one race so I’ve put them here. They can be anywhere from tiny to human sized, have pointed ears, light or dark skin according to their type, and are intelligent.

Seelie Sidhe have magic associated with light or the elements and there are a couple of traits unique to them: Sunlight skin which is a pale golden skin tone and metallic gold hair. Again, not all Seelie Sidhe have these traits, but they can only be found in Seelie Sidhe.

Brownies/Urisk: Brownies are small in stature and enjoy housework. Urisks are their cousins who live in streams and waterfalls.

Erdluitle: Little fairies about the size of a seven-year-old child with webbed feet that they hide beneath their robes. They can control storms, avalanches, and rain.

Gancanagh: The Love-Talkers. Traditionally, there are only male Gancanagh but I’ve added females to my books. They seduce humans, make the human fall in love with them , and then leave, causing the heartbroken humans to search for them until they die.

Ghillie-Dhu: Tree fey who are kind to children. They can disguise themselves as leaves and love to play pranks.

Glastig: Beautiful women who seduce men and friendly until the men notice that their feet are goat hooves. Then they drown the men and drain their blood.

Gnomes/Dwarves: Short fairies, tend to be bearded, live underground or in hollowed trees. They age very quickly and seem to be born old.

Hamadryadniks: They can appear as living foliage and hate humans.

Merrow/Mermaids: Sea-dwelling fairies who have the torso of a human and the tail of a fish. They are also associated with the Dragon Courts.

Selkie: Seal shapeshifters who use their seal skin to shift into a seal. If their skin is damaged, they can’t shift and will eventually die. Also associated with the Dragon Courts.

Imps/Gremlins: A type of Goblin who love human technology and are renowned inventors. They’re around four-feet-tall and like to play jokes.

Vanaras: Monkey-shifters who can fly without wings.

Zana: Fairies of charm, beauty, nature, creativity, and fertility who live in the woods.

Aziza: Little, hairy, humanoid fairies who live in anthills and silk cotton trees. They like humans.

Huli Jing: Fox-shifters similar to Kitsune except they like to cause chaos.

Kitsune: Fox-shifters. They’re smart, beautiful, and have fox tails even in human form. The more tails, the older and more powerful they are. They can have up to nine tails.

Kumiho: Fox-shifters similar to Kitsune but are very dangerous. They like to eat the livers of little boys.

Tengu: predator bird-shifters. In human form they can have wings, beaks, or bird heads. They use staffs.

Uiring: Earth elementals who are normally incoporeal but can take any form, including human.

Dryads: fairies who have close associations to trees. They have vines in their hair and are bound to the tree they live in.

Keelut: Hairless dog-shifters. They only have hair/fur around their feet, even in human form.

Apparas: forest-dwelling fairies who look like children. They control grass and trees.

Vila: Wind Nymphs who appear ghostly but beautiful. Their voices create wind and they’re fierce warriors. They have healing and prophetic power.

Alux: Similar to Leprechauns but dark and of South America.

Curupira: They have bright red or orange hair and feet that are turned backward.

Gorgons: Winged females with venomous snakes for hair. Have claws and sometimes tusks or scaly skin.

Bogles/Boggarts: A type of malevolent Goblin.

Asrai: Water fairies who lie in the sea and are also associated with the Dragon Courts. Called Sea Ghosts for their pale, translucent skin. They’ll dissolve into water if exposed to sunlight.

Hags: Malevolent women with an aged appearance. Can be cannibals.

Brag: Fairies who take the form that their victims most fears.

Leanan-Sidhe: The Dark Muses. Beautiful women who take human lovers to inspire. Their inspiration usually makes the men insane. They feed on the man’s life energy until they die.

Abbey Lubbers: Devilish fairies who lead people to evil. Similar in looks to Brownies and will even exchange housework in exchange for food.

Hedley-Kow: Mischievous shapeshifters. Tend to look like horses or ogres and eat humans.

Red Caps: Large Goblins who soak their caps in the blood of their victims.

Corrigan: Two-foot-tall fairies who wear white veils held on by leather straps to protect people from their breath which is so bad, it can be fatal to humans. They can shift into a horse or goat.

Nuckelavee: Monstrous horse with one fiery eye, legs that end in flippers, a huge mouth, and a man’s torso attached to its back. The torso is faceless and has a huge head that wobbles and long arms that almost reach the floor. Also associated with the Dragon Courts.

Pukas: Animals, but worth mentioning since they’re referred to so often. They are jet black dogs with fiery eyes that cant shift into horses. The Twilight version is gray with brown eyes.

Shellycoat: Around three-feet-tall, live in fresh water streams, and like to wear shells that clatter when they move.

Spriggan: Small fairies that can inflate to tremendous sizes.

Baobhan-Sith: The White Women. Vampire fairies. They lure men with their beauty and then use their sharp talons to puncture their victim’s neck and drink his blood. Afraid of horses.

Dullahan: Headless riders. They ride black horses and carry their heads under one arm.

Cu-Sidhe: The Death Hounds. Canine-shifters. They’re the size of a bull with the appearance of a wolf in their canine form. Shaggy fur, usually green or white, long tail that’s either braided or coiled, and paws as large as a man’s head.

Bean-Nighe: Washer Women. They wash the bloody clothes of those about to die. They have one big, protruding tooth.

Alp-Luachra: The Joint Eaters. Newt-shifters. They live in rivers and streams. When someone falls asleep beside their home, they shift into a newt, slide down their throat, and eat the contents of their stomach. The size of children with large eyes, webbed hands, and thick skin.

Fachan: They have one leg, one arm, one eye, one toe, and one finger centered on a body covered in hair and feathers.

Djinn: There are three classes of Djinn: the Dragon-Djinn, the Snake-Djinn, and the Dog-Djinn. They can take any shape except for animal forms; in those, they are limited to those of their class.

Duende: Short, hat-wearing fairies related to Goblins. They like to trick children into getting lost.

Kappa: Child-sized fairies with scaly green, blue, or yellow skin. Live in ponds or rivers. Have webbed hands and feet, a carapace, beak for mouth, and a flat, bald spot with a bowl in it on top of their heads, in which they carry water from their home.

Yowie: Similar to the Bigfoot. Tall, fur-covered, and can run on all-fours.

Bunyip: Swamp fairies who can shapeshift into 9 forms.

Adlet: Dog-shifters. Lower half is dog and upper half man.

Qalupalik: Green women with long hair and very long fingernails. They live in the sea.