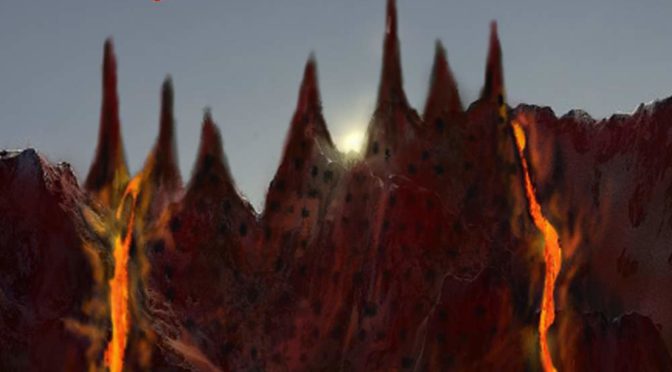 Castle Aithinne has been the home of the royals of the Fire Kingdom since its first creation shortly after the birth of the fire fey. Its rooms and towers were magically pulled from the Mountains of Serenity which border the kingdoms of Faerie. Although it flows seamlessly into the mountainside, it only takes up a small portion of the range and is bordered by a lava flow on each side. These flows drop down into a magma moat which guards the entrance to the castle.

The front of the castle is carved with pictures of fire fey and creatures. At night, the light from the flows and the moats light up the carvings and make them appear to come to life. At the center bottom of the castle, both at front and back, are the main entrances. The entrance which faces the Forgetful Forest is protected by a drawbridge and the moat. The entrance facing into the Fire Kingdom is open, without a door of any kind.

The monarch of the Fire Kingdom reside in a central tower and have a spectacular view from their window but the royal bedroom isn’t exactly up inside the tower, it’s at the base of it. The tower forms an open coned ceiling above them while the rest of the castle stretches out to either side of them. This whole floor is reserved for the King and Queen of Fire and includes a nursery, an office, sitting rooms, and a library. The Solar is accessed from a set of stairs at the end of one hallway and this room has an amazing view of the lava flow on the right side of the castle.

A central staircase runs up the height of the castle, reaching all levels except for the underground caverns. These caverns are the domain of the Hidden Ones and even though they’ve come out of hiding, they still prefer to live below the castle in the warm lava tubes.

The castle has a dining hall which doubles as a throne room and the kitchens are attached to this. Most of the celebrations are held here although there is an actual ballroom at the other end of the castle. There are numerous chambers within the castle for all of the many fire fey who choose to live at court. These rooms differ by the resident and are generally made to accommodate the fey who reside within them. There is even a pixie village right outside the back of the castle (Fire Kingdom side) where the pixies live.

Not too far from the pixie village are the Weeping Woods, a dripping jungle blooming within the wet steam created along the boundary to the Air Kingdom. All manner of fey creatures live in the woods, including the agile nurials, and the village of Misty Meadows is just outside it.

Back to the castle itself; lights are magically powered but heat, for cooking, bathing etc. is gained from the underground rivers of lava. These rivers not only heat the castle but also provide an environmentally safe disposal system. Chutes are found throughout the castle for sending waste down to the flows where it burns away harmlessly. This also serves as their septic system. Everything is nice and tidy in the Fire Castle.