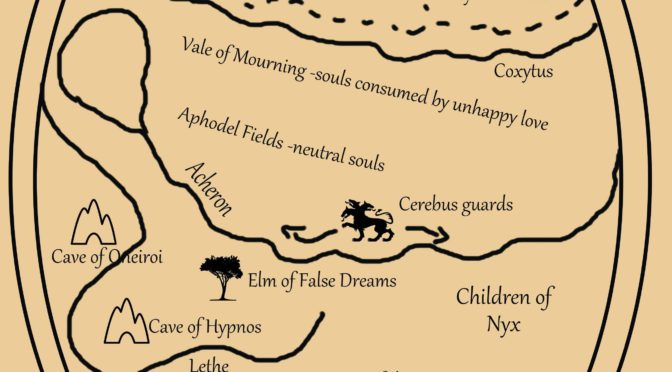 The Greek underworld is a shared god territory similar to the Norse Nine Worlds in that several gods live within it without magical boundaries separating them. It is surrounded by Oceanus and past the Blessed Isles lies Olympus. But as if Oceanus is not enough of a border, the Styx river circles the Underworld six times.

From bottom to top, the Underworld is as follows: first you pass the Styx, also known as the River of Hate. This is the mythical boundary between Earth and the Underworld. It was believed that the waters could make you invulnerable and is the famous river which Achilles was dipped in by his heel.

Once you get past the six banks of Styx, you reach the true land of the Underworld. The first thing you’ll see are the Groves of Persephone. These are willow and poplar trees. Within them is a triangular white rock called Leuca. To the right of Leuca the groves continue on but they are bisected by the streams of Okeanos. Past the groves are the Gates of the Sun; arching, white, stone, Greek gates which lead to the territory of Nyx and her children.

In Nyx’s land you’ll find her children; centaurs, gorgons, hydras, harpies, and chimera. To the left of this land is the river Lethe. Lethe is also called Ameles Potamos and is the River of Unmindfulness. All who drank from it would experience complete forgetfulness. On the other side of the Lethe is the Land of Dreams which is in perpetual night. There you will find the cave of Hypnos and then further in, the cave of the Oneiroi, where Morpheus and his brothers lived. On the edge of the Land of Dreams, on the banks of the Acheron river,  grows an elm tree. False dreams cling to the bottom of its leaves.

The Acheron is the River of Woe but that is a misleading title. It is where the dead souls are taken to their afterlives by the ferryman, Charon. It is a place of healing, not punishment, though if you cannot pay the ferryman’s price, or if your body was left unburried, you’ll have to wander the river banks for a hundred years. Two other rivers within the Underworld flow into the Acheron; the Cocytus and the Phlegethon. The river itself is fed by the Acherusian Lake.

Beyond the Acheron lies the Asphodel Fields. This is where the ordinary of indifferent souls go.  Those who have committed no serious crimes but who also did not achieve greatness. Past this meadow is the Vale of Mourning. Here the souls of people consumed with unhappy or unrequited love must mourn for eternity. Just past the vale is the Cocytus river.

The Cocytus is the River of Wailing and it flows down into Tartarus. Tartarus is beneath the Greek Underworld; the Under-Underworld, if you will. Down there, souls are punished. These are souls who created havoc in life or committed crimes against the gods. Hades passes judgement and makes sure the punishments fit the crimes.

Also leading into Tartarus, and running along its far bank, is the Dividing Road. On this road, souls are judged by three kings; Aeacus, Rhadamanthys, and Minos. The entrance to Tartarus is guarded by Tisiphone, a scary woman who likes to shake snakes at people.

But the road also leads up to Hades’ palace, which is surrounded by a massive stone wall. Within those walls are beautiful gardens and unusual creatures, everything that Hades and Persephone loves.

To the right of the palace are the Elysian Fields. This is where the distinguished souls; heroes and those favored by the gods, get to go. However, if you are worthy of the Fields, you’re offered a choice. You can remain there or you can reincarnate two more times and if you achieve the Elysian Fields each time, you can move to the Isle of the Blessed.

Past the Elysian Fields is a beach. A bridge goes from the beach, across the six Styx rivers, and over to another beach. There lies Oceanus and a few miles off shore is the Isle of the Blessed. On these islands the lucky few who have achieved greatness three times, can spend eternity in a blissful paradise.

Phew, I know it’s a lot and I haven’t even covered Tartarus in depth (down there is the entrance to Titan Territory) but I hope it’s helped you get a greater grasp on the Greek Underworld.