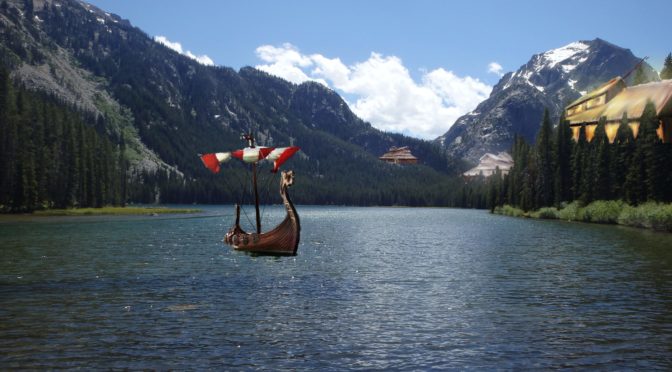 The Viking territory of the God Realm is divided into 9 worlds. Odin lives in the world of Asgard and within it, he rules over 3 halls. His halls are  built across the lake from Thor’s hall Bilskinir.

1. Valhalla: the golden hall where those slain in battle go to live out their afterlives. Valhalla is massive, its main dining hall is more than a mile across and the walls are lined with gold shields. There are several rooms off this main room, including work rooms, bedrooms for the slain Vikings, and offices.

2. Valaskjalf: This is where Odin lives and spends most of his time when he’s in Asgard. It’s his silver hall, as Valhalla is plated in gold, Valaskjalf is plated in silver. Its main hall is much smaller than Valhalla’s but it’s decorated similarly, lined with silver shields instead of gold. Odin’s bedroom, which he once shared with Sabine, is on the second floor of the hall. Behind the hall is a vegetable and herb garden, fruit trees, and a path which leads through the forest to Gladsheim. Also within Valaskjalf is Hlidskjalf (Vervain calls it Odin’s Santa TV). Odin can view the entire world from Hlidskjalf.

3. Gladsheim: Traditionally, this is where the 12 diar (judges) who regulated the affairs of Asgard, would meet. Odin had disagreements with most of them over the years and so there hasn’t been a meeting of the diar in centuries. Gladsheim has been closed ever since.