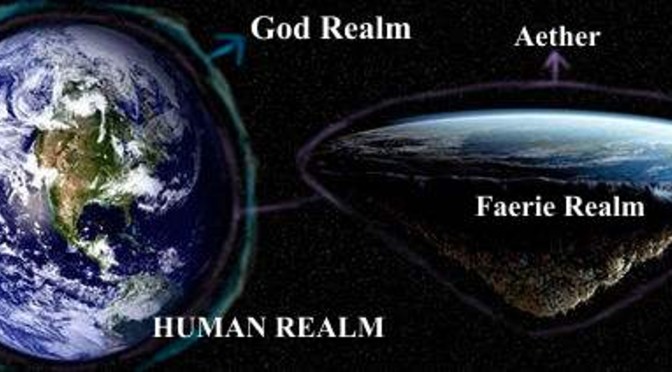 The Godhunter world is your world except there’s a little more to it. Your world, Earth, is referred to by gods and faeries as the Human Realm. You know all about this place so I won’t go into it.

Gods live in a realm layered magically over the Human Realm. This world is the same size as Earth and their Universe is the same as ours. Think of it as another dimension.
The God Realm is separated into territories. Each territory is ruled by one god. Within these territories, gods can provide afterlives for human souls. They can also use their magic to transform their territories into whatever landscape they wish. Not only that, they can transform items in their territories into other items; animals, trees, buildings, even clothing. Each territory is protected by a ward which its ruling god sets. No other god can step into a god territory without knowing the chant to get past these wards.

The Void is the place where souls are born and the place where they were meant to go upon the death of their physical body. It is the original afterlife for both gods and humans and can be reached through the Aether. Most humans go to the afterlife provided for them by gods they’ve bonded to through sacrifice. But if a god or human were to die without a god bond, they would go here and eventually be reborn.

The Inter Realm is the only human created realm. It was formed purely by accident, through the extreme amounts of energy humans began infusing it with. It is a realm of pure information and can be traveled if you know the technique. It was traveled first by imps, also known as gremlins, faeries from the Fire Kingdom.

A realm of sleeping consciousness. This is the place your soul travels to when you sleep. It is a realm of pure potential that can be altered with every thought. Faeries helped to create this realm, as they did the God Realm, and so they have the most power here but there are also dream gods who hold the power of changing the dreams of humans.