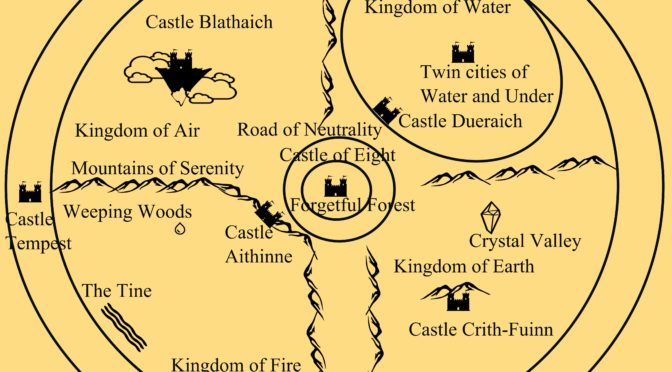 Faerie exists in a pocket of space. It’s not a full world like Earth or laid over one like the God Realm. It simply exists within a womb of dark matter and so it can expand. Originally, there were four kingdoms, one for each element, ruled by the House of Spirit. But then the dark fey were made and Faerie created a fifth kingdom for them to live within. This fifth kingdom is much thinner than the other four but it encompasses the entire realm. Beyond it lies only dark matter and the potential for more land.

For our tour of Faerie we shall begin with its heart; the Castle of Eight. The castle is made from eight massive trees, thus the name. Seven trees form walls and living quarters around a courtyard and then a central tree where the high royals and their closest court live. Around the castle grows the Forgetful Forest, so named for its astounding beauty which has been known to make men wander through it, forgetting all else.

In a circle around the forest lies the Road of Neutrality which links all the kingdoms. This road previously had only one offshoot, the End of the Road, which led from the Castle of Eight to the Great Tree; the largest tree in all of Faerie and the only tracing point in the realm. But with the addition of the Kingdom of Darkness, the road was added to and now there are three more offshoots, one along each mountain range separating the kingdoms. The Mountains of Serenity is the mountain range which forms the borders between the kingdoms and is also the mountains from which Castle Aithinne was built.

Castle Aithinne is the royal abode of the House of Fire and is carved directly out of the mountains. It’s front, facing the Road of Neutrality, is bordered by lava falls and a long magma moat.  Just behind the castle lays the Weeping Woods, named for the steamy environment produced from the cool winds of the Air Kingdom hitting the hot air of Fire. The Fire Kingdom continues back across plains and forests until it reaches a collection of hot springs and then the vast lake named the Tine.

The Tine flows underground at its furthest point and its waters are heated by Fire’s underground lava flows. This hot water fuels the castle and continues on beneath Faerie, all the way across the realm to the Water Kingdom. The warmed water contributes to the currents of the Faerie Ocean that makes up most of the Kingdom of Water. Then the overflow goes through Castle Deuraich and over the edge of the basin of the Kingdom of Water. It becomes a raging waterfall which fills a small lake at the base of the cliff upon which Castle Deuraich perches. This lake also flows underground, returning the Tine’s water to it via another another underground river of cooled water. Thus the water is cycled; warmed and cooled to keep the Sea at the perfect temperature.

Within the Sea of the Kingdom of Water are the twin cities of Water and Under. They are reached via crystal tubes which lead from Castle Deuraich straight into the underground city of Under. There, the lower half of the second water castle stands. The upper half of the castle goes above ground and into the sea, ruling over the city of Water, which sprawls around this upper portion of the castle. At the very end of the Kingdom of Water, a portion of the Mountains of Serenity becomes a volcano. This volcano is fed by the Kingdom of Fire’s vast lava flows and the magma cycle back to it, just like the water of the Tine. Thus are all the original kingdoms connected by their elements; fire and water flowing through earth and air to balance the realm.

Between Water and Fire lies the Kingdom of Air. Air is a kingdom of dangerous mists which open into the dark matter surrounding Faerie. If you were to fall into the mists without the ability to fly, you would continue to fall into dark matter forever. Within the mists float islands connected by immense chains. If you can’t fly, you can reach the islands using the leriewoag coach, which will take you directly up to the main island. On the main island stands the Castle Blathaich, home of the House of Air.  Floating plants and flying fey creatures live here with the air fey.

Across from Air, between Water and Fire’s other borders, is the Kingdom of Earth. Earth holds many jungles and rock formations, including the Crystal Valley; a wide valley with a solid quartz floor surrounded by towering crystal formations of every type of gem. Nearby lies a mountain which rises above the underground Castle Crith Fuinn. Here lives the House of Earth.

And there you have it, the symbiotic, elemental realm of the faeries.