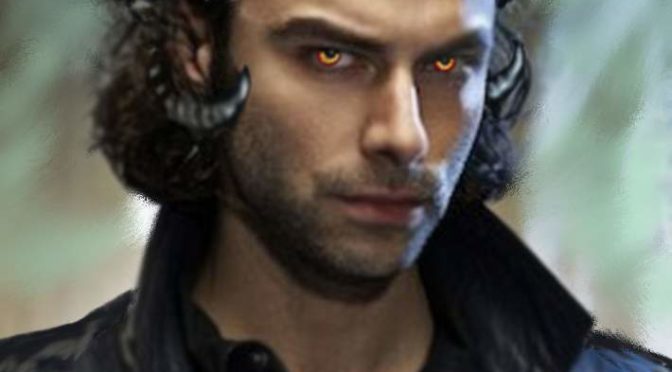 Distinguishing features: Black horns curving around the sides of his face and fire eyes.

Conri Shatterhowl is the son of a cu-sidhe hound of the unseelie and a glastig of the seelie. His mother raised him in the Seelie Court till he was a teenager and then brought him to Twilight to live. He feels a strong connection to the seelie because of this and has no problem striding into their kingdom or castle.

His magic is the dreaded Shatterhowl, giving him the ability to break things with his voice… even bones. He is also a barghest, a type of dog-shifter who can take many forms but usually takes that of a large, shaggy, black dog with horns and fiery eyes.

He’s a brash playboy on the surface, always looking for his next lover, but there is much more to Conri than that. Danu saw his potential and elevated him to knighthood. Seren then gave him a place on her coveted Star’s Guard. He has been a key figure in bridging the gap between the sidhe and the “lesser” fey.

Conri has an honorable heart to temper his scoundrel tendencies but when faced with a beautiful woman, his romeo ways always win out. It’s his greatest weakness despite the fact that he believes he’s in control of his love affairs. He’s the ultimate bad boy who is already tamed deep inside, it’s just going to take a special woman to reach the true man beneath the layers of flirtation.

But whomever that woman is, she’s going to be a very lucky lady.