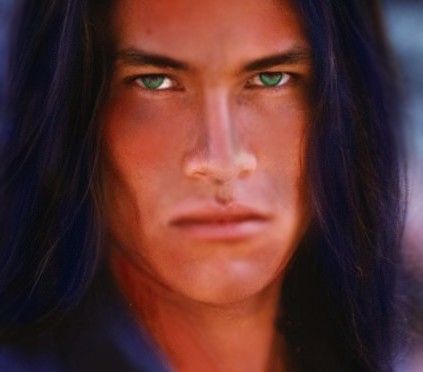 Other NAMES: Blue Hummingbird on the Left, Uitzilopochtli, Xiuhpilli (“Turquoise Prince”) and Totec (“Our Lord”)

Our first villain-turned-ally in the Godhunter Series, Huitzilopochtli AKA Blue, is a complex character to say the least. To truly understand him, you need to know his history. He was the first born son of his parents, and his father’s first born child off of the continent of Atlantis. His father had several other sons who came with him from Atlantis but none of them shared Huitzilopochtli’s mother. His only full sibling was Coyolxauhqui, his beloved sister.

Blue’s brothers were jealous that their father had chosen Blue as his heir and so they attacked Blue’s home and killed his parents and sister. Unknown to them, Blue’s father had already passed on his sun magic to Blue and so Blue’s brothers got nothing from the patricide. Blue found vengeance by killing all of his brothers and casting their bodies into the sky. He buried his sister’s body on the Moon and so the Aztecs have always considered her to be a Moon Goddess. The priests that stood by him during the battle against his brothers, were rewarded with part of the energy Blue took from his brothers, giving them prolonged life. After Blue changed Eztli into a vampire, his priests asked to be changed as well so they wouldn’t have to keep relying on a flow of magic from Blue to sustain them. Ironically, they were simply exchanging one form of magic for another and Blue’s power still sustains them.

The trauma of his family’s murder wounded Blue for many years and tinted his eyes red. It was a reaction of his blood magic to the burning anger that remained in his heart, unquenchable even after he killed all of his brothers. Shortly after that, Blue accidentally  almost killed his lover, Eztli, and in trying to save her, he turned her into the very first vampire. She fled from him, hating him for turning her into a monster, and this betrayal further wounded Blue. This anger and resentment restricted his nahual (an inner power animal) from helping him. Vervain discovered her own nahual and used it to free Blue’s in Of Gods and Wolves. Once Blue’s nahual was free, it was able to help him overcome his grief and anger. His eyes then returned to their original green color.

The myths Blue was based on have attributed a lot to his character. In the books, Blue claims to have led his people to the site where they built Tenochtitlan, the Aztec capital. This is true to the myths which state that he led the Aztecs from their original home of Aztlan to the Valley of Mexico where he told them to look for an eagle poised on a cactus devouring a snake. This was where they should build and they did. That eagle image is still depicted on the Mexican flag.

The myths do describe him as a god of the Sun and War and they do claim that during battle he became so inflamed that the only way to quench his heat was by drenching him in blood. This was my inspiration for making him into the vampire god.  I thought the blood and the sun magic was just too perfect and seemed to explain so many vampire issues. Where I differed from the myths most was in the story of his family’s murder. The myths say that his brothers and his sister turned on him and of course, the reasons I give are purely fictional.

Huitzilopochtli was probably the most important god to the Aztecs. They even referred to themselves as “the people of the Sun” and they believed it was their duty to provide their god with daily sacrifices of human blood and hearts. This was thought to nourish Huitzilopochtli.  The last thing I think worth mentioning was Huitzilopochtli’s weapon; a fire serpent called Xiuhcoatl (pronounced zi-o-co-AH-tal). You’ll get to see Blue wield it in the book Out of the Blue, the second book in the Godhunter spin-off series; Beyond the Godhunter.