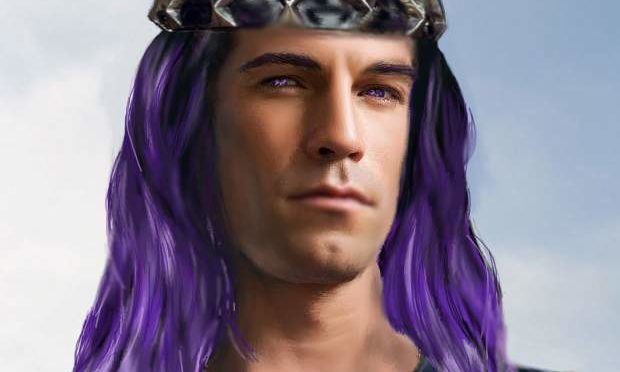 Mor magic: The Bloodthorn; an ability to manifest thorns beneath the skin and create wounds which won’t heal without the application of magic. Also possess Starcrossing; an ability to render both humans and fey starcrossed. The starcrossed will obey every command of the fairy who crossed them.

Keir is the youngest fairy king of the youngest fairy court. His parents were Queen Iseabal Bloodburn of the Seelie and King Dhoire Thorn of the Unseelie. Both were married to other people at the time of his birth. His mother still lives and rules over the Seelie Court but his father died during the Human-Fey Wars trying to save his wife. King Dhoire called on every elemental magic to help save his Queen but failed and in the end, the stress of the multiple elements raging inside him, destroyed him; exploding him from within.

The trauma of his father’s death has colored the way Keir views life. He lives it knowing that even though he’s a fairy, he is not truly immortal but simply long-lived. He could die just as his father had. So Keir takes nothing for granted and dares to love whenever and whomever he chooses. He gives his loyalty slowly but once given, it is hard to lose. Except where family is concerned; there he is loyal out of duty and love.

The kindest of the kings of Fairy, Keir also is the most fearsome. His main magic, the Bloodthorn, has rarely been used because it is so horrific. King Uisdean, Keir’s half-brother, believed Keir too weak willed to wield the magic. But he discovered that kindness does not equate to weakness and under the right motivations, Keir will strike out with his deadly power.

He has had one great love in his life and that was Seren’s mother; Catriona. Catriona was an extinguisher and married to another extinguisher when Keir met her. He didn’t allow her marriage to sway him, convinced that his attraction for Catriona was the Call of Danu and should not be ignored. Catriona gave in to Keir’s persistence and fell in love with the Twilight King. She would have left her human husband to live in Fairy, had she not conceived a child.

The child, Seren, would be in danger in Fairy. As a half-human heir to a fairy throne she’d be the target of both Seelie and Unseelie hatred. So Catriona took Seren back to the Human Realm and passed her off as completely human, the daughter of Ewan Sloane. Ewan didn’t learn the truth of Seren’s true parentage until well after his wife’s savage death.

Catriona’s death affected Keir far worse than the death of his father had. He mourned his lover deeply and finally determined to bring his daughter to Fairy and set her as his heir. He professes to be unable to love another woman but Keir’s heart is too big to be locked away and his wounds are slowly healing with the help of his daughter. I have hopes that he will find someone to love again.