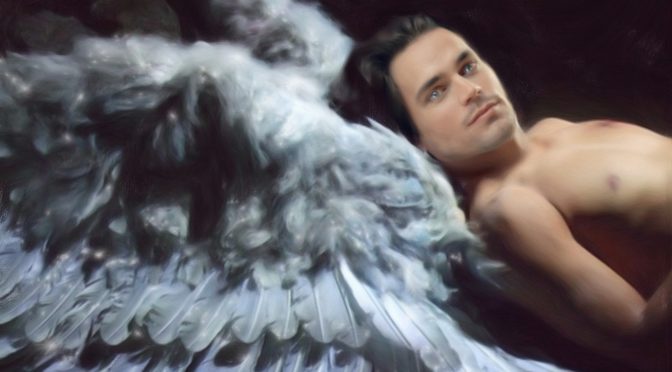 Lucifer Morningstar has many names: Devil, Satan, Beelzebub… it goes on and on. He was once called Lucifer Phosphorus the Morning Star, but that was before he met Holly and Jehovah, and became a part of the Christian pantheon.  Of course, back then it wasn’t called Christian. First there was Islam, then Judaism, then Catholicism, and finally Christianity became a part of the group. Yes, group. Jehovah rules all of these pantheons, and Lucifer was included and loved within them. Until Holly that is.

Holly was with Jehovah, but had an affair with Lucifer. The product of that affair was Azrael, the Angel of Death. Enraged by the betrayal of his wife and best friend, Jehovah started a war in Heaven. Lucifer, hurt by seeing so many of his friends dying for him, ended the war and retreated to Hell, taking on the mantle of “Betrayer”. Holly, as part of the truce, agreed to give Jehovah a son, and gave birth to Jesus.

What Jehovah didn’t realize was that he’d handed Lucifer most of the power in their pantheon. Lucifer’s fame spread as the root of all evil, and he was recognized by humans who were outside of his pantheon. Far more people believe in the Devil than they do God, and Satan gets blamed for more murders than anyone. “The Devil made me do it.” These killings, attributed to him, counted as sacrifice, and each death made Lucifer stronger. Now he rules in Hell with more power than Jehovah (Jerry) has in Heaven.

These days Lucifer prefers to be called Luke. He enjoys gourmet cooking, decorating his home, and playing video games. He views foul language as offensive, and strives to keep his words as clean as his home. Ironically, Lucifer Morningstar is a good man, and an even better father.