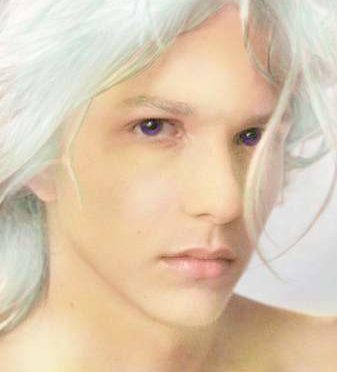 Hair: clear but with the ability to glow

Son of Queen Iseabal and King Marcan, Shane is the Crown Prince of the Seelie Kingdom. He is half-brother to King Keir and Seren’s Uncle. Shane was raised with Keir and feels a close connection to him but was even closer to Keir’s father; Dhoire. During his visits to Seelie to dally with the Queen, King Dhoire spent a lot of time with his son and Shane. He always showed Shane the same amount of affection that he did Keir and Shane grew very attached to him. Dhoire’s death affected him deeply and forged some of his strongest beliefs; like all humans are evil.
He can seem to be evil himself but Shane always acts in a manner which he believes to be honorable. In a twisted way, Shane is a good man, doing what he thinks is right for his people. Unfortunately he’s allowed pain to twist his views and control his life. And his life has been full of pain. His mother has always favored Keir because of the love she bore Dhoire and she tended to neglect Shane. King Marcan loved his son but as he watched Shane become more and more attached to his wife’s lover and then be so heartbroken over Dhoire’s death, Marcan’s love faded to a grudging affection that was almost given out of duty. Shane could feel Marcan’s withdrawal which only added to his loneliness and anger.

As an adult, Shane trained with the Seelie knights and became one himself. He may dress well and play the part of the languid prince but Shane is no pansy. He is quite formidable on and off the battlefield. When he isn’t fighting with swords, he enjoys a good battle with words. Wit and strength are just two of Shane’s numerous qualities. I’m hoping that someday he gets past his pain and becomes the leader the Seelie need.