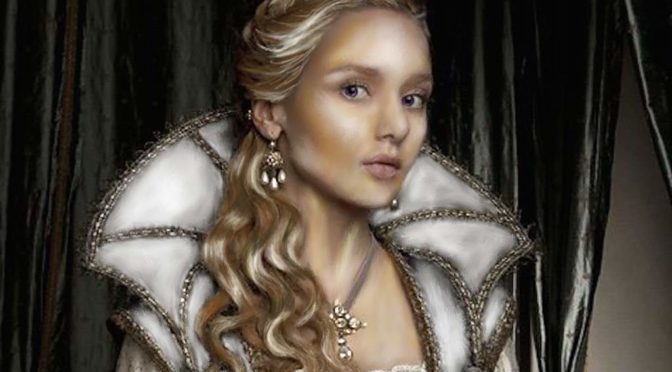 Queen Iseabal Bloodburn of the Seelie

Iseabal looks every inch the Fairy Queen, from her glittering gold hair to her jewel toned eyes. Her full, pouting mouth makes her appear sweet and perhaps innocent. But her name says it all; Bloodburn. She is no simpering, demure lady but a bloodthirsty manipulator intent on keeping everyone in her world within her control.

The one time she gave up control was when she answered the call of Danu. Iseabal may not be the most religious of fairies but she when the Goddess speaks, she obeys. Iseabal gave into the passion of the calling and bore a child to the Unseelie King; Dhoire. But passion turned into love and Dhoire continued to visit her long after their child was born.

Such relationships are not unusual for the fey but Iseabal and Dhoire’s situation was different; they ruled opposing kingdoms during a time when a tremulous truce had been reached.  Dhoire knew he’d have to stop visiting Iseabal but when he told her of his intentions, Iseabal threatened to kill their son; Keir. Horrified and afraid for his son, Dhoire kept visiting Iseabal while secretly plotting a way to remove Keir from her keeping.

Iseabal knew, as any good manipulator does, that her victim was only giving in to her demands because of the threat she held over his held.  The knowledge that Dhoire loved his son more than her, made her resent Keir even more. Then her resentment spread to include her other son; Shane, and her husband; King Marcan. Iseabal turned petulant and bitter but all of that festering anger took an insane turn when the Fairy-Human War began.

Dhoire was never able to save his son from Iseabal. He led his people to war against the humans and died trying to save his wife. Dhoire’s death and the manner in which he died (saving the woman he loved first) sent Iseabal spiraling into madness. Marcan had her confined to her rooms for months, until Iseabal finally recovered enough to resume her duties as Queen. But fury, heartbreak, and resentment left their marks on Queen Iseabal, turning her into the unstable but beautiful villain we know today.

You might sympathize with her loss and point out that there was reason behind her madness but whenever I feel sorry for Queen Iseabal, I think about her threatening to kill her son, just to keep her lover. No, Iseabal has always been a vicious manipulator. Her tragic history has simply added a few more wicked attributes to her personality. And let’s not forget, the true tragedy here is that her husband, King Marcan, still loves her.