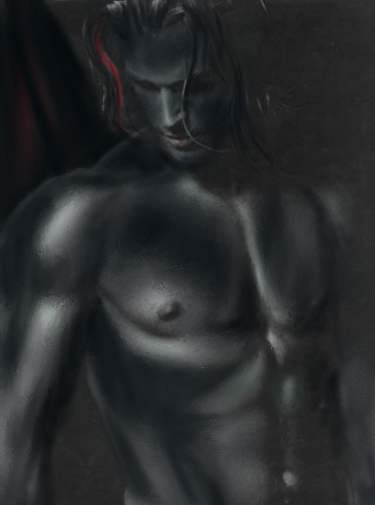 Hair: choppy black with two red stripes; one at right temple and one below right ear.

Scent: Sweet and smoky; like apple cider warmed over a camp fire.

Raza Tnyn’s grandfather was the last full-blooded dragon djinn. Raza himself is only a quarter dragon but dragon djinn blood is strong and dominates Raza’s features. It also grants him the ability to shift into an ebony dragon. This dragon nature makes Raza very impetuous and easy to anger. He’s prone to terrible rages and outbursts of violence. No one has ever been able to calm Raza when in one of his fits. No one that is, until Seren came along. For the rest of us though, it’s best to just leave his presence… as quickly as possible.

He’s a complicated fairy, with depths to him that we’ve yet to discover. He’s driven by instinct and the Goddess Danu herself. Though he’s capable of great evil, he’s also capable of righteousness. He’s actually a man of unquestionable honor and undying loyalty. Once his friendship is given, it’s never taken away.

He has one child, a son by a raven fairy. He’s not driven to procreate further and in fact sees little point to it. The dragon djinn will die out as there are no other females of his kind left to breed with and any child he has will only dilute the blood further. His son has already proven that the dragon djinn genes lose dominance after the third generation. However, he loves his son greatly and would do anything to protect him.

So what does motivate Raza? Treasure, as with any dragon. But what does he consider to be treasure? His son; most definitely. His kingdom; yes to some degree. His title; not so much. Raza’s concept of treasure is changing even as I write this. He’s changing. And it’s all because of one half-human fairy princess.