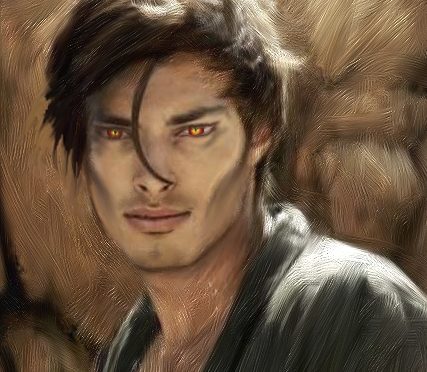 Roarke, King of the Fire Cat-Sidhe

Roarke was born, as all fire cat-sidhe are (with the exception of his son, Hunter), as a cat-sidhe. He was a playboy prince in the Earth Kingdom. A source of irritation and entertainment to his family, and a source of endless pleasure to his multiple females. He was a philanderer and a bored royal for most of his life. Then he met Vervain, and found something more interesting to do with his time.

The Godhunter attracted Roarke, as most women do, but when the initial desire wore off, Roarke found himself admiring Vervain. Admiration was something the rascal cat-sidhe rarely felt. So he pursued a friendship with Vervain that would eventually lead to a terrible choice; his family or his new friend. In most instances, the Catsidhe Prince would have chosen family. But his father was asking him to not only betray Vervain but his own morals. Twisted as they may be, Roarke does indeed have morals. So he denied his father and got disowned.

He acted as if it weren’t a big deal, but being kicked out of the cat-sidhe tribe and basically out of his kingdom, hurt Roarke deeply. Faerie saw this wound and wanted to reward Roarke’s loyalty by giving him a new kingdom and a new family. He was made into the very first fire cat-sidhe, his very element transmuted into another. Word of his transformation spread and soon more cat-sidhe were defecting to Fire, asking Faerie to change their elements as well.

Anna, a cat-sidhe whom Roarke was especially fond of, was not one of those defectors…. at first. But upon giving birth to their son, Hunter, she changed her mind. Hunter was born a fire cat-sidhe, and Anna became one as well, for the sake of her son. Roarke, who had previously been given no responsibilities and no reason to mature, now had two; a son and the woman he was growing to love.

Anna didn’t make things easy for the ex-playboy, and that was wise of her. Roarke needed the chase, but above all, he needed a woman to show him that he wasn’t as charming as he believed himself to be. Anna laid the love smackdown on Roarke and the Fire Cat King has never been the same. Now they rule their small but loyal court, and raise their son together. They haven’t married yet, but I have faith that someday soon Anna will say yes.