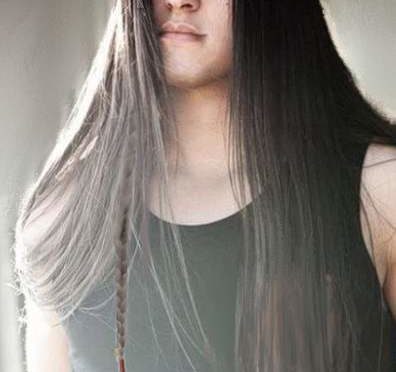 Teharon, the creator god of the Mohawk Indians is also called “He who holds Heaven in his hands”. He is a gentle man, a man of peace, but he has a deep reserve of strength within him. He loves strongly and his family is very important to him. Losing his twin Tawiskaron was a heavy blow for him but he also gained a father and grandparents in the process. So the wound is bittersweet.

His hip-length hair is always adorned by a single braid, bound with a red tipped white feather on its end. He wears it so to show that he is not a fighter but a healer. He is the son of Atahensic, the Moon Goddess and Nayenezgani, the Navajo God of War. Naye and his twin Toby are Mr T and Mrs E’s sons, making the God Squad couple who he has worked with for years, his grandparents. Teharon never knew his mother, she died at his birth, but through the memories which Vervain held, he has recently had a chance to change that. He will always be deeply grateful to Vervain for giving him a glimpse of his mother.

His father has a temperament in direct opposition to his but Teharon is still making every effort to get to know his long lost parent. Honestly though, he enjoys the time he spends with his uncle Tobatzistsini (Toby) much more than that with his father. Simply because Toby’s personality is much closer to Teharon’s; calm, peaceful, and gentle.

He has always been the healer of the God Squad but has recently begun to fight for them as well. War is difficult for the “Good God” but Teharon has felt restless waiting behind while his friends risk themselves for the cause.

As much as his family and friends fill his life with love and laughter, Teharon’s greatest joy is his girlfriend Karni Mata, the Hindu Rat Goddess. They are kindred spirits in a lot of ways and support each other with gentle strength. She has become the greatest love of his life, much to the surprise of his fellow god squaders. But love is a funny thing. It can overcome any obstacle, even rats.