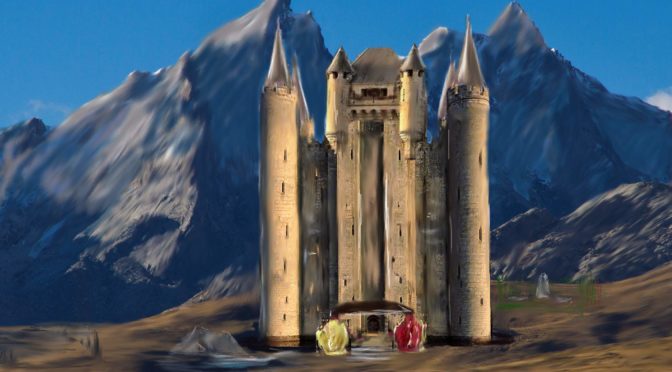 Vervain’s territory was inherited from Nyarvirezi, the Lion Goddess. It is the home of almost eighty werelions as well as herself and her men. It has an African inspired landscape surrounded by a border of majestic mountains. The palace itself began as a rambling one story building but Vervain learned how to transform items in her territory and altered the palace into what it now is.

The castle is made of a white stone veined in gold and is guarded by a set of dragons to either side of its entrance; gold on the left and red on the right to symbolize Vervain and Arach’s dragon forms. The drawbridge is always lowered and functions as a sort of veranda with Victorian furniture. At the end of the veranda, behind the dragons, two pillars stand, wrapped round with fire orchids. These fairy/human flowers brought to life by Vervain in Faerie, also grow on trellises at the back wall of the veranda (the castles front).

There are six stories to the palace not including the basement. The basement holds a wine cellar, the gym, a theater, a music room, and Kirill’s workshop. The first floor (ground level) has the dining hall, the kitchen, the larder, the armory, and the tracing room. The second floor has the library and the common room. Floors 3-5 are all bedrooms for the Intare and the sixth floor is Vervain’s personal floor. It holds her bedroom and includes a kitchenette, a walk-in closet, an entertainment area, a bathroom, the butterfly garden, and the entrance to two towers. Each tower holds two bedrooms. The left side tower (facing out from the bedroom) is Trevor and Kirill’s tower. The right belongs to Odin and Azrael.

Around the palace is a moat, fed with water from the pool nearby. It is lined in blue tiles with pictures of fish painted on. The pool has a pile of rocks over which a waterfall courses into the pool itself before running off in a small river to the moat. The Intare love to swim in both the pool and the moat. Off to the side of the pool is the training grounds and behind the palace is a remembrance garden. In the garden is a large stone carved with all of the names of Intare who were killed by Nyarvirezi and buried in mass graves. In front of the palace are grasslands, a lake, and then within the mountains there is a valley. Within the valley is a huge log cabin and another lake, fashioned after a Froekn retreat. This is Trevor’s personal place. Kirill has a special place too but it’s much smaller; a waterfall hidden within the mountains on the right side of the territory. Behind the waterfall is a little cave where Vervain and he go for private time.

There are many wonders to discover in Intare territory and the lions keep growing as a pride and a people. I can’t wait to see what they do next.