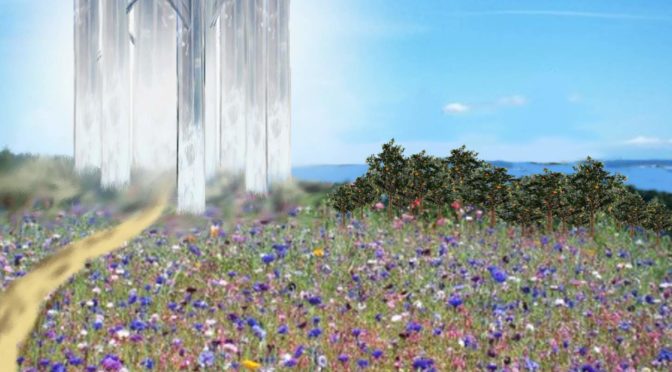 The Holy Isle of Danu is the birthplace of the twin gods; Danu and Anu. Anu left Fairy shortly after his birth and created the first rath with his passing. The temple to Danu sits right in the center of the island, amid a meadow of wildflowers. A semi-circle of three raths sits at one end of the island, these are separate from Anu’s rath and lead to the kingdoms of Fairy; one rath per kingdom so that all have access to the holy isle.

The path from the three raths leads straight into Danu’s crystal temple and circles the central crystal column before going through to the High Fairy Council House on the other side. The temple itself is made of soaring crystal columns, so wide they’re five times the width of an SUV. The columns are connected with graceful arches set at angles to lead the eye upward. At the center of the temple, the path circles around the column of Spirit which is filled with a dancing violet light.  Around the column of Spirit are four more columns, one for each element.

The Isle of Danu is the most sacred spot in Fairy and the only place where you can be assured that the Goddess will hear you. Whether she speaks back to you or not is her prerogative.