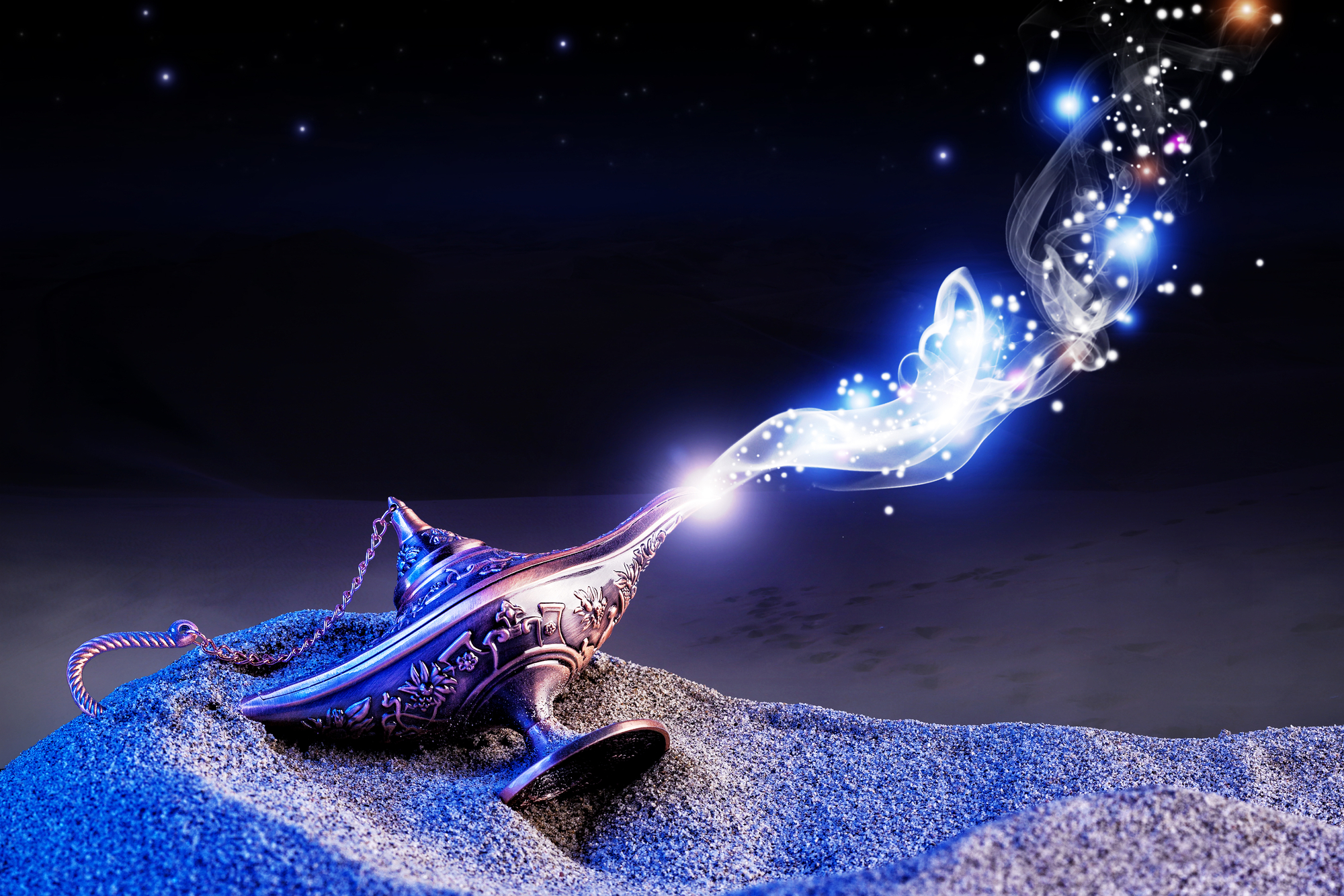 While researching my latest Godhunter book, I decided to delve into the world of the Jinn (Also spelled as Djinn or Jinni) Who hasn’t been fascinated with the idea that a ghostly being could pop out of a bottle and grant them wishes? I want one! Me, please! But the Jinn aren’t just stories to Muslims; they believe in them as firmly as devout Christians believe in Angels. In fact, they believe that the Jinn were created by God the day after he made the Angels. God formed the Jinn from a “mix of fire” or “smokeless fire.” In my books, I took a bit of artistic liberty and made that smokeless fire into dragon fire. But I digress. There has been all sorts of speculation on what a smokeless fire is—many think it’s actually a type of energy that gives the Jinn their long lifespans—but nothing more about it seems to be mentioned in the Qur’an. Oh, and yes, the Jinn are mentioned numerous times in that holy book. In fact, it’s written that Muhammad (the last prophet of Allah) was sent to the Jinn as well as the humans to preach to them about Allah. Islamic tradition also says that King Solomon, the same one of Bible fame, was given the ability to speak with animals and Jinn.

Okay, we’ve established that there is serious belief in these beings. I read that “One can’t be a Muslim without faith in the Jinn’s existence.” So, please, do not make light of them to any Muslim friends you may have. These are not blue spirits with mustaches and the voice of Robin Williams.

The Jinn are reputedly fearsome beings who were on Earth long before humans. Evidently, they pissed off Allah by growing arrogant and corrupt so he sent a bunch of angels down to teach them a lesson. Jinn-butts smacked and lessons learned, Allah felt satisfied that justice had been dealt but decided he could do better as far as races were concerned. Boom! Humans were made.

Allah liked his new creation and demanded that the Angels and Jinn all bow down to us little humans. Most did, except for this guy called Iblis (I’ve also seen him referred to as Shaytan… hmmm, what does that name remind you of?) who said “Hell no, I’m made of smokeless fire and these things are made of clay. Obviously, I’m superior” (not a direct quote). Allah told him “Hell, yes, and that just happens to be where you’re going, buddy” (again, not a direct quote) and sent Iblis to Hell. That’s right; he’s the Muslim Devil. There’s a bit of contention over whether Iblis was a jinn or an angel, but I agree with one writer who said that since Angels could not disobey Allah, it makes sense that the one who did disobey would have to be a jinn.

Back to who they are. The Jinn are believed to live on another plane of existence (that worked really well into my story as I already had the perfect plane of existence to put them in) but enjoy interacting with humans in our realm. They are neutral entities, just like humans, and are neither good nor bad but able to be either. There are stories of Jinn helping humans and being a muse to poets and then other tales of them being nasty buttheads.

Jinn are said to be spirits who can take the shape of animals or people, some are even said to be able to take any form. They like human crafts and several became masters in human arts, and they also have power over the elements. Before Islam was established, the Jinn were supposedly worshiped by humans because of all of their mystical powers. Jinn can also possess people. The Arabic word majnun, used as a word for insanity, actually means “to be possessed by a jinni.” Because of this possession possibility, the Arabs have numerous ways to protect themselves from Jinn. Also of note is that when in their physical forms, the Jinn can be hurt. That’s the only time they can be hurt, actually. Despite this, they often take physical shape. One reason is to have sex, which Jinn engage in not only with each other, but also with humans. And yes, there can be offspring from such pairings.

Now, here’s the part that really surprised me; there are subclasses of Jinn. Lots of them. I won’t go too crazy with the descriptions, but I do want to give you a brief overview of each type.

Ifrits are Jinn who can be found in ancient ruins. They are thought to be the protectors of the Pyramids of Egypt. They have societies like humans with social ranks within their tribes or clans. They have been known to marry humans and have children with them and have the power to grant wishes. Despite that, they’re also known to be mean motherpluckers and it’s probably best if you stay away from them.

The Marid are the most powerful Jinn and are the basis for modern genie stories. The word marid means “giants.” I’ll let you draw your own conclusions on that. They can grant wishes but those wishes come at a high cost. Thy’re likely the origin of that whole “3 wishes” thing since they can also be forced to grant those wishes if you trap them with magic or perform a ritual in their honor.

This one lifted my brows. I had no idea that Ghouls were Jinn. These Ghouls are shapeshifters with a craving for human flesh. They feed on corpses usually but wouldn’t turn down a fresh meal. Their women are especially scary because they can appear normal and even beautiful. They’ll trick men into marrying them and then eat their husbands. That seems like a lot of effort just for dinner, but I’m sure they have their reasons.

These are Jinn who appear as dogs or other animals. They’re found mostly in Arabia, Persia, and India. Evidently there were soldiers who disappeared during World War II who were led off into the desert by dogs. Those dogs are thought to be Hinn.

These are shapeshifting Jinn who live in the desert. They’re more open-minded than other Jinn and are friendly toward humans. They like to appear as whirlwinds or white camels (interesting choices). They are particularly useful since they are the enemy of the Ghouls, but they are also mischievous so I wouldn’t count on their help even in the midst of a ghoul attack. They have been know to take sides in human wars and either help or hurt soldiers depending on their opinion of them.

The Sila are shapeshifters who like to meddle in the affairs of humans, usually in a helpful way. They’re rarely seen.

These Jinn are similar to vampires. They live in the desert and drink blood from humans via foot licking. That’s right; they lick people’s feet until they bleed then drink the blood. Evidently, this is done while the person sleeps and doesn’t wake them. (This must be why I can’t sleep with my feet exposed; I must have sensed that there were foot-licking monsters out there. I just thought they lived under my bed, not in the desert.) I also read that the Palis aren’t too bright, and I instantly thought to myself; well, that’s obvious. Anyone with intelligence would find a better way to drink blood. How many licks does it take to get to the center of a human foot?

Supposedly, we’re all born with one of these as a companion. They are the little devils on our shoulders telling us to do bad things. With a lot of work, you can train them. Muhammad trained his so that he was never tempted by evil again. Training your qareen has other benefits as well. You can learn anything about anyone since everyone has a qareen and they can talk to each other. You will know how to cure illness, be able to find lost things, and make others obey you—again through their qareen. Oh, and you’ll know before visitors arrive; that’s obviously the most awesome benefit. Maybe Muhammad wrote a book on how to train your jinn. That would be helpful and it would also be a great name for a movie.

Okay, these are basically Muslim Demons. They are the followers of Iblis and love to do naughty things to humans. They can make you sick, destroy your life, and even kill you. They, like other Jinn, can possess humans, but they’re always mean about it. They’re malevolent asshats.

This is another type of vampire jinn. The Vetala are said to be the original vampires and are highly intelligent, as opposed to the foot-lickers. They can possess corpses and keep them from rotting. What purpose could they possibly have for that? Well, they use these fresh corpses as suits that they possess to walk among humans undetected. They’re also psychics who read thoughts and can tell the future.

Phew. When I first started researching, I honestly didn’t think there would be this much information on Jinn but in addition to the above, I found numerous stories, some sweet and horrifying, about Jinn interacting with humans. I hope this has opened your eyes about these fascinating beings—who may or may not be myths—and maybe even entertained you a bit. Now, stop reading this and go rub a lamp.

Meet the Jinn in this book: